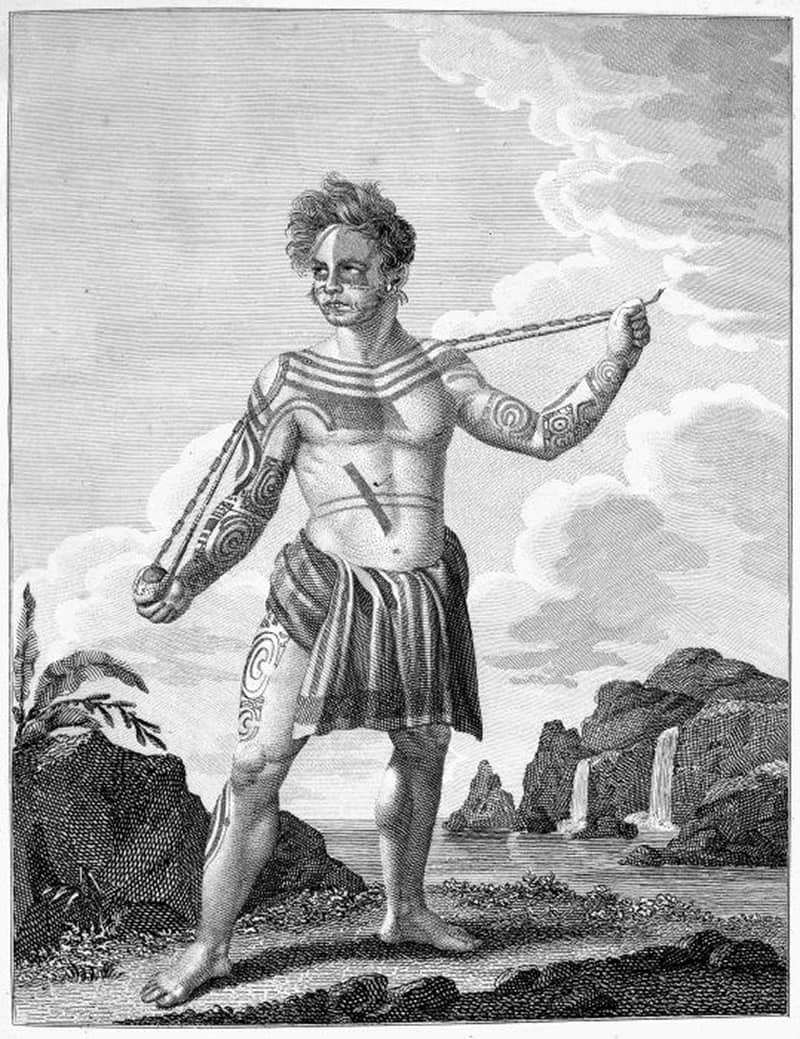 At the end of the 18th century, more and more journeys were being made from Europe to the newly discovered South Pacific. Men would travel for months on end to visit the islands in the Pacific Ocean, and they would bring back goods for their home countries benefit, such as plants and other materials, as well as the incredible stories of the people and culture of the islands.

The Allure of South Pacific Tattoos

Many of the sailors were thoroughly impressed by the native islanders and their way of life. One of the things that attracted the European explorers to the people of the South Pacific was the fact that they had their skin permanently decorated. These native tattoos were something that none of the men had ever seen before, and they were greatly intrigued by them. Some of them even got their own tattoos while they were visiting the islands, and picked up the ancient art of tattooing from the islanders, in order for the sailors to tattoo one another while on the open seas.

Some of these sailors became immersed in island life and received more and more tattoos, turning them into a spectacle to be seen. Back in Europe, most people had never seen a tattoo and they were understandably curious about this new form of body art. The men that returned from the South Pacific with native tattoos were in high demand — such high demand that people were willing to pay for the privilege of seeing the tattooed men.

One of the world’s first paid tattoo attractions, Jean Baptiste Cabri, is just such an example of sailors that were so intrigued by the native practice of tattooing while on explorations to the South Pacific, that he chose to be tattooed himself.

French by birth, Cabri lived the life of a sailor on the open seas until he chose to desert the British whale hunting expedition he was assigned to and take up life on the Marquesas Islands. Cabri and one of his shipmates, an Englishman named Edward Roberts, chose to stay on the islands instead of leaving with the rest of their crew.

Most accounts of Cabri’s life in the South Pacific indicate that he settled on the island of Nukahiwa, and went on to marry a native woman. Cabri claimed later on in life that she was the daughter of the island’s chief, and they had several children together. Cabri also claimed that the islanders of Nukahiwa were cannibals, and although he wouldn’t join his new family in eating human flesh, he would go out on “hunts” to find and kill people to feed the cannibalistic cravings of the islanders. Cabri claimed that he would trade the men that he killed to be consumed by the islanders for pigs, and eat those instead, while also deeply integrating himself into the island life.

No one is completely clear as to how long Cabri stayed on the island, living as one of the natives, although it is known that his tattooing was extensive. Records and illustrations show that Cabri had tattoos on most of his body, including his face.

The tattoos were black in color and were made up of geometric patterns, such as spirals, lines, and checkerboard patterns. These patterns could be seen on Cabri’s chest, shoulders and arms, abdomen, and legs. On his face, Cabri had tattooed lines on half of his forehead, and the skin around one of his eyes had been colored in with black line tattoos.

In 1804, a Russian expedition led by Adam Ivan Ritter von Krusenstern made its way to the South Pacific, and Cabri was discovered by on of the men onboard named George Von Langsdorff. This man somehow convinced Cabri to return to Russia with the crew, and he became first European tattooed attraction.

Cabri displayed his tattoos in Moscow and St. Petersburg, giving the audience a glimpse at something that they had never seen before. They were wowed by Cabri’s elaborate tattoos, and he made so much money for his promoters, other businessmen across Europe began to take notice of the lucrative enterprise and search out their own tattooed attractions.

Cabri was an incredible site to Europeans at the time, and he would further entertain those that paid to see his tattooed body with stories of his life and times amongst cannibalistic islanders, his marriage to a native princess, and the process of being tattooed. Cabri would even show off his tattoos in true showman’s fashion by performing native island dances, much to the delight of the crowds of people that would turn out to see spectacle of the tattooed man.

In between his performances, Cabri also taught swimming classes to the troops of the French Marine Corps, showing off the excellent swimming skills that he picked up while living on the Marquesas Islands. He then took his performance on the road, and place himself on display as a paid tattooed attraction throughout the rest of Europe.

Although Cabri enjoyed some success with his own personal travelling tattooed man display and the tales that he would tell of his life living with the “savage people” of the South Pacific, his act eventually lost traction, and his career fizzled not many years after it began.

In 1812, Cabri died of unknown causes in a hospital in northern France. While in the hospital before his death, Cabri picked up on some talk of scientists and doctors removing his skin and preserving it for scientific studies and experiments. Apparently, Cabri didn’t like the sound of this, and he ordered that he be buried in between two other bodies after he died in order to prevent his skin being removed and studied.

The success of Cabri’s short career as a tattooed attraction exposed people to tattooing in a time when it was an unknown art form, and also ushered in a new career for many men and women in the years to come who would follow in Cabri’s footsteps and become tattooed attractions themselves.