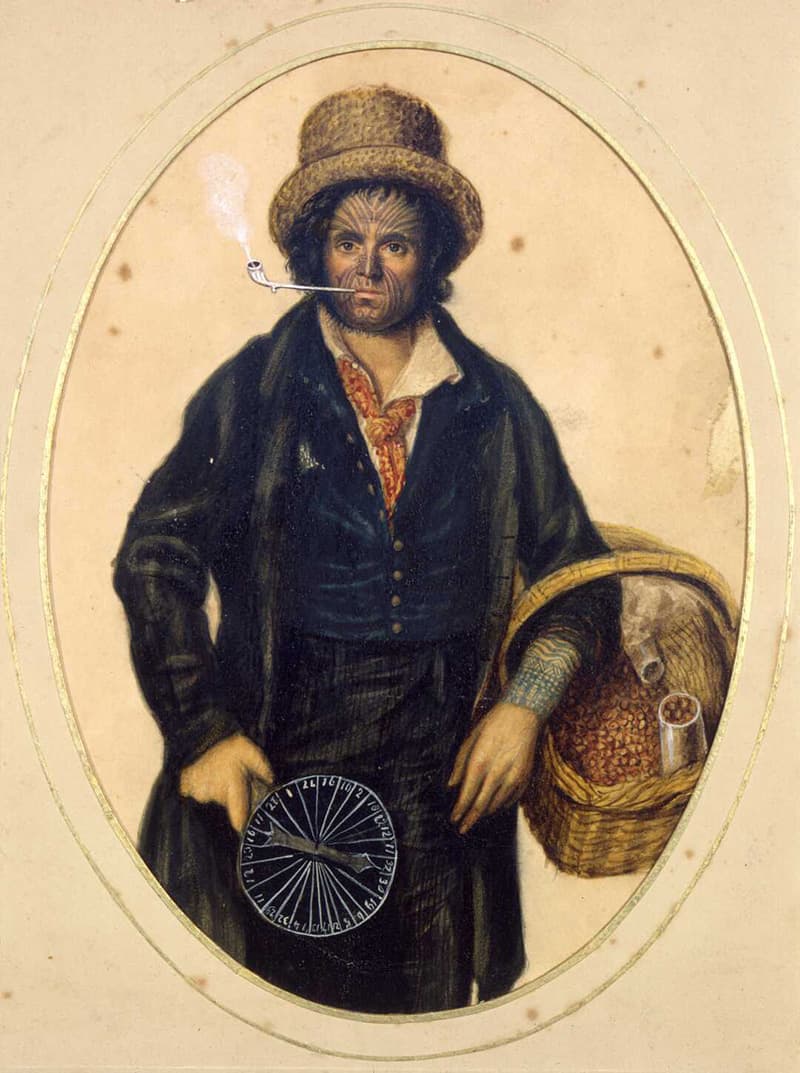 At the beginning of the 19th century, many European and American expeditions were being sponsored to send explorers to the native islands of the South Pacific in order to gain knowledge of the islanders that lived there, as well as the natural resources that might be found and used back in Europe.

One of these expeditions, led by Captain Jackson of America, landed off the coast of New Zealand in January of 1826 and was greeted by a group of natives in full Maori warrior dress. One of the warriors was decidedly different than the others, and Captain Jackson cried out in surprise, “Here is a white New Zealander!”

The man responded in perfect English and told Captain Jackson that he was indeed not a native from New Zealand, but an Englishman named John Rutherford. The “native” then proceeded to tell Captain Jackson an incredible tale of how he had come to live amongst the Maori people for the last ten years, and what his life was like on the island of New Zealand.

Rutherford claimed that the ship that he had been on had landed there looking for fresh water, and after being greeted by the native tribe in a friendly fashion, had gone about looking for what they had come for. It was at that point, when the crew’s defenses were at their lowest, that the Maori tribesmen had attacked. They captured the ship, killing the captain and two other members of the crew. The rest of the men had been taken as slaves, although six of the remaining twelve men were immediately taken to the cook house and prepared to become Maori meals, according to Rutherford.

He stated that he and the remaining five sailors were taken to the house of the chief, a long and wide building with a door so small and low that the men had to crawl to gain entrance. Once inside, the sailors saw a group of native New Zealanders huddled around, seated in upright positions and covered with woven mats, although they appeared to be sleeping. Rutherford said that they looked like rows of beehives or stacks of hay.

Rutherford claimed that he and the other white sailors were forced to endure the process of native Maori tattooing, called moko, and he later described the process in detail in a book that he wrote about his life amongst the native people: “The whole of the natives having seated themselves on the ground in a ring, we were brought into the middle, stripped of our clothes and laid on our backs, and held down by five or six men, while two others commenced the operation of tattooing us. Having taken a piece of charcoal, and rubbed it upon a stone with a little water until they had produced a thickish liquid, they then dipped into it an instrument made of bone, having a sharp edge like a chisel, and shaped in the fashion of a garden-hoe, and immediately applied it to the skin, striking it twice or thrice with a small piece of wood. This caused a great deal of blood to flow, which they kept wiping off with the side of the hand, in order to see if the impression was sufficiently clear. When it was not, they applied the bone to the same place a second time. They employed, however, various instruments in the course of the operation; one being made of a shark’s tooth, and another having teeth like a saw. They had them also of different sizes, to suit the different parts of the work. While I was undergoing this operation, although the pain was very acute, I never moved or uttered a sound, but my comrades moaned dreadfully. Although the operators were very quick and dexterous, I was four hours under their hands; and during the operation, the chief Aimy’s eldest daughter several times wiped the blood from my face with some dressed flax. After it was over, she led me to the river, that I might wash myself (for it had made me completely blind) and then conducted me to a great fire. They now returned us all our clothes with the exception of our shirts, which the women kept for themselves; wearing them, as we observed, with the fronts behind. We were now not only tattooed, but what they called tabooed, the meaning of which is, made sacred, or forbidden to touch any provisions of any kind with our hands. This state of things lasted for three days, during which time we were fed by the daughters of the chiefs. In three days, the swelling had greatly subsided, and I began to recover my sight; but it was six weeks before I was completely well. I had no medical assistance of any kind during my illness; but Aimy’s two daughters were very attentive to me, and would frequently sit beside me, and talk to me in their language, of which, as yet, however, I did not understand much.”

Living with the Maoris

Rutherford claimed that after they were forcibly tattooed, he and the other men stayed at the village for the next six months, living in a small native home that was assigned to the them by the elder members of the tribe. At some point after that time, the six white sailors were taken further inland to other Maori villages, where four of the men were left with the chiefs of four various villages.

The remaining two sailors, Rutherford and a solitary companion, were then led to a hut that had built for them, and were left to live out their days as they wished, partaking in whatever English customs that they cared to and were able to accommodate. At some point during this time, Rutherford’s companion angered the Maori people, and it is said that he was executed.

Fitting in with the Locals

It was after the death of his remaining friend that Rutherford realized how tenuous his situation truly was, and he set about embracing the Maori culture as much as he possibly could, in an effort to ingratiate himself to the people and stay alive. Rutherford chose to discard his more civilized attire in exchange for native dress, and also took a Maori woman for his wife, whom he claimed was the eldest daughter of the chief. When he saw that all of the islanders had more than one wife, he quickly married another of the chief’s daughters in order to better fit in.

And so Rutherford lived for ten years amongst the Maori, and was tattooed with their moko body decorations, with tattoos on his face, chest, abdomen, and arms. When Captain Jackson arrived in the village where he had been living, Rutherford claimed that he was overjoyed at seeing another “civilized individual,” and quickly devised a plan in which to return to America with the ship’s crew.

Not Quite a Maori

The Maori chief had another plan, and wanted Rutherford to trick the crew into complacency so the tribe could be attacked and captured, much in the way that Rutherford had been captured years before. The chief thought that the former English sailor had been completely integrated into the Maori culture, and that he would assist the natives in attacking and consuming more sailors.

Rutherford claimed that he went to see Captain Jackson as he was ordered, but instead of doing the chief’s bidding and tricking the man into certain demise for himself and his crew, Rutherford warned the captain about the savages’ plot, and was taken onboard to safety and rescued from his native captors of so many years.

Back to the U.S.A

Rutherford returned to America with Jackson and his crew, landing in Hawaii and quickly forgetting about his Maori brides when he married a Hawaiian woman. He and his wife then travelled to his home town of Bristol in England, where Rutherford made quite the splash with his tattoos.

Most people in Europe had never even seen tattoos, and when Rutherford discovered what a sensation his body art was for the people of England, he went on tour as a paid tattooed attraction, showing himself off to crowds of people — wowing them with his tattoos and wild story of his capture by “savage cannibals” and his rescue many years later.

Although not the first European tattooed attraction (the Frenchman tattooed in the Marquesas Islands, Jean Baptiste Cabri, came before him), Rutherford was a popular performer throughout the 1820s and 1830s in both London and Bristol. The crowds loved to see his moko style facial tattoos, and the geometric tattoos on the rest of his body, made up of lines, zigzags, dots, and checkerboard patterns.

In fact, the only tattoos that Rutherford had received that appeared to be authentically of the Maori style were his facial tattoos, while those on his body looked to have been more likely Tahitian. The more realistic explanation of his tattoos is that he jumped ship while on an expedition to New Zealand, and had the tattoos done to fit in with his new community — never foreseeing himself returning to England or living as an Englishman again.

Rutherford became one of the first “tattooed entrepreneurs” by recognizing that a profit could be made by exposing a population to tattoos and crafting a tale of capture, cannibalism, and forced tattooing in order to draw in more crowds — paving the road for a new career path in later years for tattooed men and women.