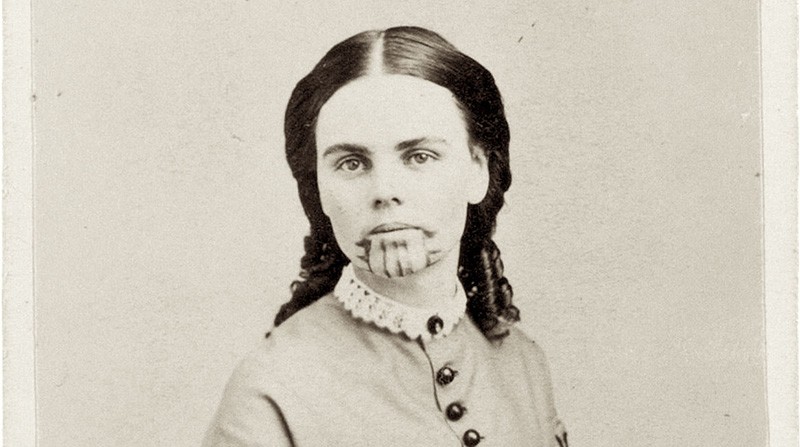 During the 19th century, the popularity of tattooed attractions was on the rise, and many men and women placed themselves on display to the public. For a price, people could stare in wonder at the tattooed performers and hear their incredible tales of how they came to be tattooed. Many of the tattooed performers created wild tales of being captured by savages in the South Pacific or the ruthless Native Americans of the West. The crowds loved to hear about the terror and struggle of men and women being stolen from their very beds and forcibly tattooed for the pleasure of the mysterious savages of the world. With very few exceptions, these tales of capture, tattooing, and eventual heroic rescue or escape were complete fabrications. The men and women that made their living as tattooed attractions knew that dramatic stories attracted more attention than the simple truth of them paying a tattoo artist to cover them their bodies with elaborate native-style tattoos.

Olive and the Yavapai Indians

One of the few tattooed attractions that told a true tale of capture and forced tattooing was a woman from a Mormon family in Missouri named Olive Oatman. The Oatman family was made up of Olive, her mother, father, and her six siblings. In 1851, Olive was thirteen years old, and the Oatman clan decided to set off for New Mexico on a wagon train made up of other Mormon families looking for a new life in the still growing West of the United States. After arriving in New Mexico, the Oatman family didn’t care for the way of life that they encountered, and seemed to disagree with the way things should be done with the other families in their group. They chose to leave the safety of the large wagon train in search of their own future. They struck out on the Gila Trail, which was deep in Apache country. When the Oatmans reached southern Arizona, they were attacked by members of a Native American tribe. Originally believed to be Apaches, it was later discovered that the natives that besieged the family were Yavapai Indians.

Treated as a Slave

Most of the Oatman family was killed during the brutal attack, leaving only Olive, her sister Mary Ann, and her brother Lorenzo alive. Olive and seven-year-old Mary Ann were captured by the Yavapai warriors and brought back to their village. Lorenzo was severely beaten and left for dead, although he managed to reach a nearby settlement and eventually returned to the original Mormon wagon train that he and is family had left behind. The Yavapai tribe treated the captured sisters as slaves, and forced them into performing hard physical labor while receiving regular beatings. This treatment went on for about a year, at which point Olive and Mary Ann were traded to the Mojave Indians for blankets, vegetables, and horses. The girls travelled on foot with their new “owners” for ten days, until they reached the Mojave village in California.

With the Mojave tribe, the two girls were treated much more kindly, and they were eventually adopted by the tribe leader and his wife, making them honorary members of the Mojave clan. One of the ways that the Mojave people welcomed Olive and Mary Ann into their culture and way of life was by tattooing their faces in the Mojave tradition. The girls both had their chins tattooed with five vertical lines from the lips to the chin, with two triangles on either side of the outermost line on the chin. These tattoos were believed to lead to a good afterlife for those that bore them.

Reunited with her Brother

In 1855, a severe drought struck the area, killing most of the crops, and many of the members of the Mojave tribe died of starvation. One of those to pass away was Olive’s sister, Mary Ann. Shortly after Mary Ann’s death, rumors of a white woman living amongst one of the local Native Americans began to circulate amongst the European settler communities in the area. A year later, in 1856, a messenger arrived in the Mojave village where Olive lived, asking for her return to the European settlement community. Although Olive still believed her brother, Lorenzo to be dead, along with the rest of her family, he was very much still alive, and searching for her. Lorenzo was actually a big part of the intense negotiations that followed between the Mojaves and the United States government for Olive’s return to white society. Finally, the Mojave tribe agreed upon a price for Olive’s return to her brother, and the U.S. government paid to have Olive set free and brought safely to nearby Fort Yuma in Arizona.

Upon arriving at the fort, Olive was barely recognizable by her brother or even as a white woman. Her skin had browned deeply from regular exposure to the sun while wearing the traditional Mojave garments for women, which left her bare from the waist up. She had also seemed to have forgotten the English language after her years with her Native American captors. After being given some new Western clothing, and calming down from her culture shock of being returned to civilization, Olive began to adapt to her new life with the help of her brother. She also seemed to be ashamed of her facial markings, and wore a veil to cover her native Mojave tattoos, in an effort to fit more comfortably back into civilized Western ways of life.

Shortly after Olive was rescued, a Methodist minister named Reverend Royal Stratton wrote a book about the capture of Olive and Mary Ann, entitled Life Among the Indians. The book quickly became very popular and successful, as it was one of the few tales available about what happened to those that were captured by Native Americans. Olive and Lorenzo both received royalties from the book sales, and used some of their profits to pay for educations at the University of the pacific. After graduating, Olive was convinced by Reverend Stratton that she should travel the country and share her experience with as many people as she could. Olive and Lorenzo moved to New York with Stratton, touring the area to share her story and promote Stratton’s book.

During these lectures, Olive would remove her veil so the audience could see her facial tattoos, which always drew large reactions of wonder from the crowds, especially knowing that she had been captured and forcibly tattooed by native savages. The lecture tour was a big hit, and Olive quickly became a celebrity. In 1865, Olive met and married a cattle ranch owner named John Fairchild. Her new husband did not support her career as a tattooed attraction. He refused to allow her to continue to tour and lecture, and he burned every copy of Stratton’s book that he could get his hands on.

Olive and John moved to Texas where they did well financially thanks to wise land investments. Their married life seemed to be relatively peaceful, although it is believed that Olive suffered from bouts of depression and Post Traumatic Stress Disorder. Olive was truly an inspiration to those that had suffered from trauma and misfortune in their lives, and also helped to pave the road for other tattooed attractions, especially women, even though she was unable to continue touring and telling her wild but true tale of her captive life. She died of a heart attack in March of 1903 at the age of sixty-six.