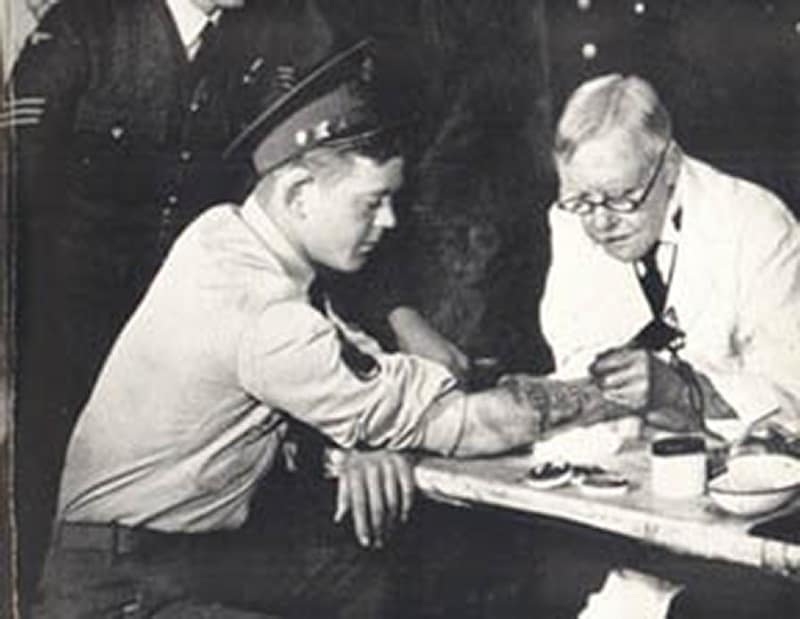 Known as the “King of Tattooists,” George Burchett was arguably the most famous tattoo artist of his time. Tattooing in London throughout the first part of the 20th century, he catered to both the social elite and the working class, as well as members of the Royal family.

The Birth of a King

Born George Burchett-Davis on August 23rd 1872 in the seaside town of Brighton, the “king” had an early start as a tattoo artist. He practiced on his younger brother, Charles, who at the age of five was more than happy to trade candy for the pleasure of having George scratch designs on his skin. George also placed his “scratchings” on his classmates, with them lining up to get the chance to get his newest work. Unfortunately, George’s tattooing business wasn’t as popular with the administration as it was with the students, and he was expelled from school at the age of twelve.

No longer able to attend school, George decided to enrol in the Royal Navy against the wishes of his parents, instead having his grandmother sign the required consent form. As a deckhand, George travelled all over the British Empire, with stops in the West Indies, the Mediterranean, Africa, India, and the Far East. He was most impressed with the varieties of designs and high levels of skill that he discovered in the native tattoos that he found during his travels. George also continued to develop his own skills during this time, tattooing his fellow sailors.

Leaving the Navy and Setting Up Shop

However, the structure of naval life just didn’t agree with George so he jumped ship while on shore leave in Israel and set up shop as a tattoo artist in Jerusalem for a brief spell before boarding a Spanish merchant ship to avoid being caught and punished for deserting the Navy. George successfully alluded the Admiralty for twelve years but began to miss his homeland, so he dropped the “Davis” in his last name and returned to England, hoping that the name change would be enough to keep the authorities at bay.

After returning home, George set up shop as a cobbler in south London and continued to tattoo on the side whenever he had the time and opportunity. During this time, George had the chance to meet two legendary English tattooists, Tom Riley and Sutherland MacDonald. He was impressed by both of the artists, and MacDonald actually took George under his wing and taught the young man as much as he could about the art and procedure of tattooing.

From Cobbling to Tattooing the Royals

George continued to work as a cobbler and take on other odd-jobs when he could, as well as keeping up with his back-room tattooing career. During his free time, he met and married a young woman named Edith, and they set up house together in Bow, east London. Meanwhile, George’s reputation as a skilled tattooist continued to grow amongst the working class, and he was soon gaining clientèle amongst the sailors, dock workers, and transients that came through London from all around the world. In 1900, George gave up cobbling work for good, and took up tattooing as his full-time occupation, opening a studio on Mile End Road and later, near to Waterloo station to catch trade from soldiers on their way to the front-line in World War One.

With a permanent shop to draw in even more customers, George soon became a favourite of not just the working class but wealthy Londoners, and even the Royalty. Although both Riley and MacDonald offered stiff competition, George was able to count King George V, King Alfonso XIII of Spain, and King Frederick IX of Denmark amongst his customers, as well as many “leisured people of money,” as he called them. People came from all over Europe and the far spread British Empire to get a George Burchett tattoo.

One of his most famous customers was the circus performer, Horace Ridler aka “The Great Omi.” Omi wanted to up the ante by covering the tattoos that he already had received with broad stripes and patterns. Omi paid George several thousand dollars to cover his body in that design from head to toe, creating the appearance of a human zebra.

Although George gained quite a bit of fame due to his clientèle, as well as being featured on both radio and television, he never forgot his Naval roots and continued to count enlisted men as amongst his most frequent customers.

George also caused a bit of a stir with the inclusion of his self-invented “cosmetic tattooing” at his shop. Women would come from all over the country and varying walks of life to have their complexions lightened or tinted by George, and would often stay to have a more traditional design such as lover’s initials or a flower placed on their legs or shoulders.

Always interested in bettering his craft, George was also known to constantly update his flash with new designs, incorporating many of the African, Japanese, and Asian motifs that he discovered during his days of travelling the world in the Navy.

George kept up a booming business until 1942, when at the age of seventy, he attempted to retire and pass the running of the studio onto two of his sons. However, World War II sprung into full flight and the demand for tattoos was so great from all of the sailors and soldiers that were going off to war, George was forced to return to help his sons handle the overflow of business, and ended up staying on to work in the shop even after the war was over.

The King of the Tattooists continued to work until Good Friday of 1953 when the great artist and inventor passed away suddenly at the age of 81. His work is still highly respected in the tattoo world today, and his life is the source of much talk and speculation due to his varying techniques, history of working with an elite and exotic clientèle, and innovations in the tattoo business, such as modifying a very early version of the tattoo machine to his specifications.