From Slaves to Royalty: A Brief History of European Tattoos 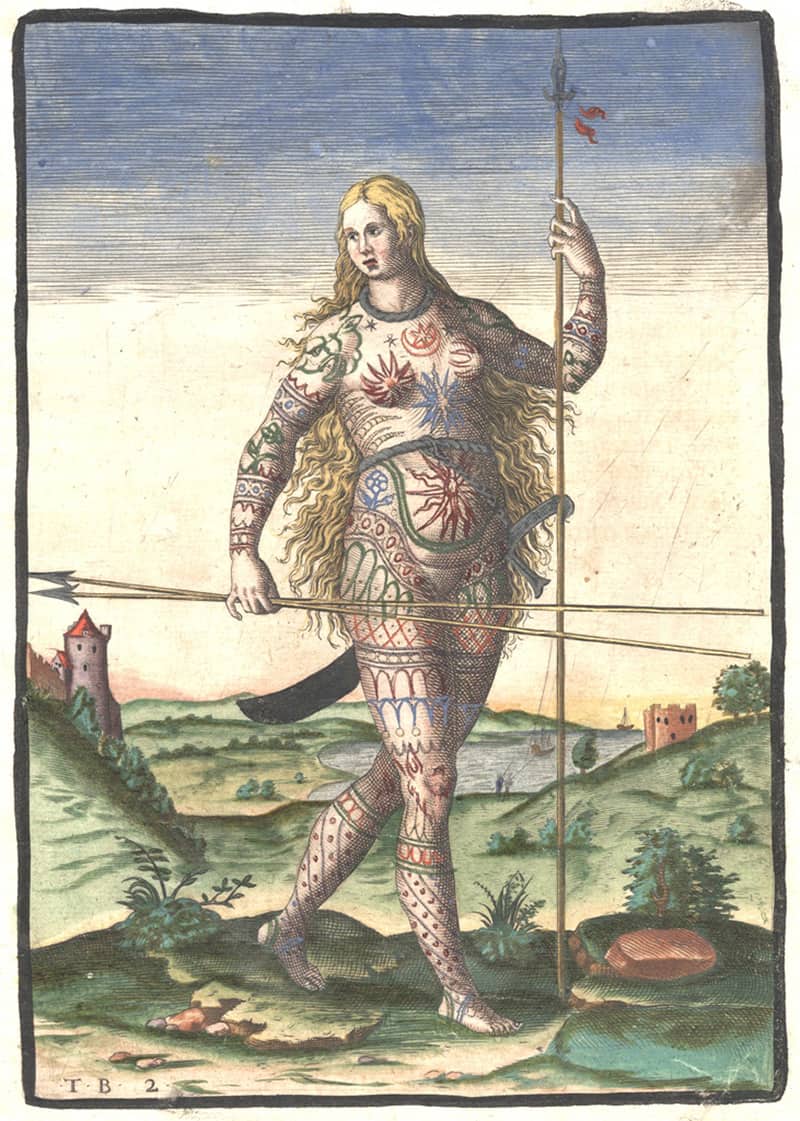 The history of tattoos in Europe has ancient roots and an intriguingly uneven development. The continent was regularly affected by influences from other cultures, leaving behind tales of tattoos appearing to be the marks of slaves and criminals, to times when bearing tattoos was a right of passage for the elite and wealthy.

The fascinating past of European tattoos begins with the Ancient Greeks and the Romans. The knowledge that was shared by the historians of those cultures tells us that the Roman tattoo culture was actually derived from that of the Ancient Greeks, who did not adopt the practice of tattoos even though many of the natives of their neighboring lands did so. Instead, Greeks eschewed tattoos, viewing those that bore them as barbarians, that is until 512 BCE when they noticed that the ruling class of Persia was using tattoos to mark their slaves. The Greeks then adopted the practice of tattooing the faces of their own slaves, making it almost impossible for them to run away. Plato also noted in his writing of Greek laws that tattoos were placed on those that broke into temples and stole the treasure that they found there, making tattoos a part of the criminal and slave classes. In fact, the Greeks used the same word for stigma and tattoo.

Roman writers such as Virgil, Seneca, and Galenus noted that their culture took the same stance on tattoos as the Greeks did — choosing to only mark slaves and criminals as means to keep them separate from the rest of their people. Tattooing specific groups of people in this way made monitoring their movements very easy and was even used as a form of punishment for misbehaving slaves or citizens that broke the law.

The Roman attitude towards tattoos changed when they encountered an army of Britons during a war and noted that many of the soldiers bore tattoos with pride, as badges of honor and strength. The Romans admired the ferocity of these enemies, as well as the masculine symbols of their tattoos and soon Roman soldiers began bearing their own tattoos.

A tribal people that moved about Europe in the time between 1200 and 700 BCE and finally settled in the area known today as Ireland, the Celts were huge proponents of the practice of tattooing. The Celts celebrated body art and many wore full-body tattoos done in a blue ink known as “woad.” Celtic tattoos were done in a spiraled, knotted style with interlocking lines, woven into intricate braids. Celtic knots symbolized life connections and the various paths that people take throughout their lives. The Celts often tattoo themselves as a means of protection from evil spirits and while on the battlefield.

From 7000 BC to around 845 AD, the Picts lived in the area of Europe now known as Scotland. They were covered from head to toe in elaborate tattoos, causing the Romans to refer to them as the “Pictii,” which is Latin for the “Painted Ones.” Animals were the main cause of inspiration for the tattoos of the Picts. They decorated their bodies with images of birds, fish, and various beasts of the region by pricking their skin with sharp bits of bone dipped in colored grasses, creating a blue hue for their permanent body paintings.

Christianity and the Crusades

Even though Constantine banned tattooing of the face and hands around 300 AD, tattoos continued to be popular amongst certain groups, especially soldiers. This trend continued well into the 11th and 12th centuries, when soldiers fighting in the Crusades could be seen with tattoos identifying them as Christians so they could be assured of a proper burial if they were killed in battle. The soldiers of the Crusades chose to have tattoos of religious inspiration, with the Jerusalem cross being the most popular.

Tattoos fell out of favor after the Crusades, as many people believed that they were forbidden by the Bible, and therefore, by God. The Christian population of Europe continued on with the trend of marking the “unfavorable” members of society with tattoos, but otherwise tattoos were largely ignored and continued to develop a stigma during this time.

Sailors and Soldiers of the 18th and 19th century

It wasn’t until the 1700s that tattoos began to break out of the cage of stigma and enjoy some measure of favorability once again. Sailors began to return from journeys to the South and Central Pacific islands with exotic tattoos that they had done by the native people that they encountered during their travels. Tattoos were an important part of Tahitian culture and the natives had been covered with beautifully done tattoos that caused the sailors to marvel and want tattoos of their own. Soon, these sailors were returning home and showing off their new body art, causing quite the stir amongst European society.

In the later part of the 18th century, Captain James Cook returned to England with not just newly tattooed sailors, but also a tattooed Tahitian guide that was a very impressive fellow. This magnificent, fearsome, and savage looking guide was given quite the tour of England, with a trip to meet the King and visits to fairs and carnivals where the people of England paid money to catch a glimpse of him in all of his tattooed splendor.

There were also some very strange and even macabre practices brought about by the influx of exotic tattoos and the natives that introduced them to the European sailors of the 18th century. It soon became a trendy practice to trade guns and other goods for the tattooed heads of Maori warriors. The demand became so great for these macabre souvenirs that Maori traders began capturing slaves and commoners, killing them, and then tattooing their heads to trade for desired goods. This practice was fortunately ended in 1831 when the British government made the importing of human heads illegal.

Soon, more and more sailors and soldiers were getting their own tattoos at various ports of call and during down times in service of the Crown. These men began to practice the art of tattooing for themselves and some of them even went on to open tattoos parlors of their own, once their military service was complete. Even officers in the Navy and the Army began having tattoos done and this made its way into the elite circles of Europe, including into the Royalty itself.

Even though tattoos were still seen by the majority of Europeans as the practice of savages, criminals, and the lower classes, there were some pioneering members of the wealthy, powerful, and even the Royalty that became advocates of tattoos. From Prime Ministers and Dukes, to Kings and even Queens, tattoos began making the rounds of the elite in the 19th century.

Winston Churchill and his mother both had tattoos, as did King George V, the Duke of Newcastle, and Tsar Nicholas II, to name a few. Wealthy and powerful men chose to have tattoos done as way to show how well-travelled they were, while the women of the elite class saw it as another mark of decoration, like jewelry, and as a way to pass the time in the “off-season” in fashionable social circles.

During the time of Victorian England, there were even “tattoo parties” where ladies would gather for not just chatting and drinking tea, but to have popular tattoo artists of the time add to their ink collections. Most of these women saw tattooing as not just fashionable but as a “special secret” of their feminine power, as they mostly chose to have their tattoos placed on areas of the body that were hidden while they were clothed.

Tattoos and religion also became friends once again, as many of those in the upper class chose to have crosses and other religious iconography tattooed on their bodies. Military service was also a popular inspiration for tattoos of various military regiments amongst the upper class. For the Royals, there were several that chose to be marked permanently with their Royal Family Crest as a way to show family pride.

Following a markedly patchy and varying history, the tattoos of today’s Europe have once more become commonplace in all classes. From the working class to Royalty, you can still see tattoos throughout modern Europe. Tattoo studios flourish in European cities and the artwork that can be seen amongst today’s ink collectors has greatly improved, being developed over hundreds of years. Tattoo designs have become intricate and detailed, with many different styles up for grabs and many different inspirations and reasons for tattoos. The social status of tattooing has evolved from slaves and criminals of the past to a trendy fashion statement and continues to gain popularity throughout Europe and all of the world.