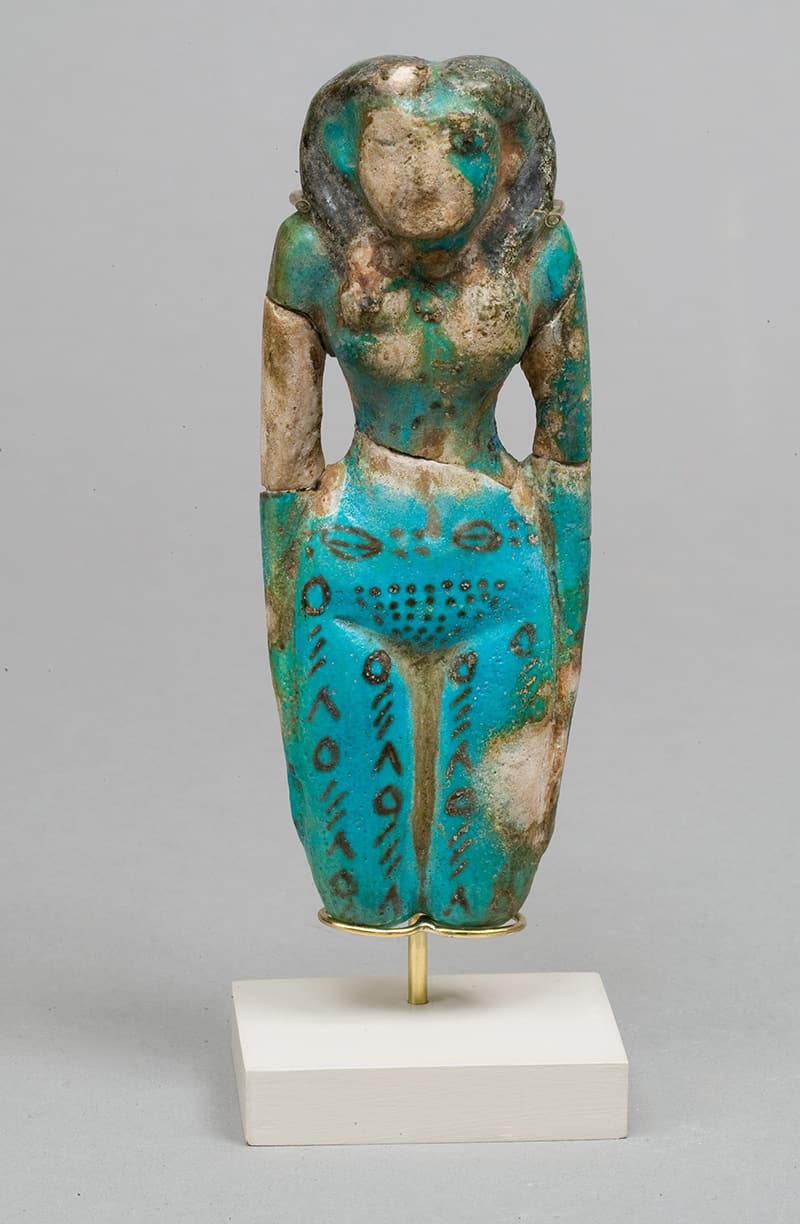 Female Figurine from Egypt, Memphite Region, Lisht North, cemetery east of the tomb of Senwosret via The Met Museum

Egyptians are known for the highly symbolic and stylised artwork found on the walls of their monuments and tombs, but they are also the source of some of the earliest recorded appearance of tattoos, as well as the longest consecutive history of the art of tattooing. Ancient Egyptians tattooed images of their gods, music, dance, fertility rituals, and geometric patterns on their bodies for over 4,000 years.

The Earliest Evidence of Tattoos

The first sign of Egyptian tattoos dates back to 2000 BC, which is right around the time that the first pyramids were being constructed. Although there has been very little about tattoos mentioned in the surviving texts of the time, and only a few mummies bearing tattoos have been discovered, it is believed that tattoos played a significant role in Egyptian culture.

Three female mummies from that period were found with tattoos on their stomachs, thighs, and pelvises. Due to the placement of the tattoos, it is believed that they were used to ask the gods for protection and blessings during pregnancy and labour.

There have also been many stone figurines found with what appears to be tattoos painted on their bodies. These figurines were found in the tombs of significant historical figures, lending them credibility and weight in the belief that tattooing was a regular occurrence among the upper classes.

It appears that mostly women of high status were tattooed during that time period, as one of the mummies was identified as a priestess of the goddess Hathor. Her name was Amunet, and her body was well-preserved and featured tattoos in simple geometric patterns across her abdomen, thighs, and breasts.

As was the case with Amunet, most of the first Egyptian tattoos were of a simplistic geometric design, such as dotted lines and diamond shapes, and were black or dark blue in color.

As time went on, these early simplistic patterns became more complex designs, such as the figure of the god Bes, who was said to be the patron of music, dancing, and fertility. The figure of Bes was usually tattooed on the thighs of women, and was said to ease the pain and fear of labour and childbirth.

Although it seems that tattoos of the day played a major role in fertility and childbirth, due to the fact that it was mostly women who received tattoos, their placement on the body, and the images of Bes, it is also thought that tattoos could have been used as a form of acupuncture, practiced as a means to relieve pain due to arthritis or other medical conditions.

Many Egyptians believed that tattoos not only provided medical protection, but also brought them closer to the gods. They saw tattoos as permanent amulets that paid tribute to their favourite god or goddess. They also saw the placement of tattoos depicting a god or goddess as a sacrifice, earning them special favour from the deities.

Egyptian tattoos carried so much meaning and power for those that bore them, it’s no surprise that the tattooing process itself was full of significance and symbolism.

The ritualistic tattooing process began with the creation of a flat “tattooing brush,” which was made up of an odd number of needles, braided together in a bundle. Tattooing brushes were usually made up of three, seven, or nine needles, as the Egyptians placed special importance on those numbers.

The tattooing brushes were then dipped in charcoal soot or indigo powder and used to puncture the skin multiple times, in order to create the desired tattoo. Both soot and indigo contain antiseptic qualities, which helped to prevent infection. Once completed, the tattoos were also rubbed with various herbs and oils known to promote healing, and seal in the tattoo colouring agents.

The impact of the beautiful story-telling art created by ancient Egyptian people can still be seen in the appearance of gods, goddesses, pharaohs, sphinxes, and even the sun itself on the bodies of today’s tattoo collectors.

Just a few of the many historical Egyptian subjects represented in modern tattoos are:

Osiris: Ruler of the afterlife, he was seen as a merciful judge and was known as “Lord of Love”

Isis: Goddess and mother of nature and magic, she was a friend of artists and the oppressed

Cats: Seen as guides to the afterlife, cats were revered and worshipped in ancient Egypt

Amun Ra: One of the most powerful gods, he was known as the champion of the unfortunate

Horus: Known as “Lord of Life,” this notable god was depicted as a falcon

King Tut: One of the most significant and intriguing pharaohs of Egyptian history

Sphinxes: Monuments carved from stone with a human head and the body of a lion

Although it has been many thousands of years since the Egyptians first began practicing the art of tattooing, they have left us with a rich history of their culture and beliefs through their artwork, monuments, and even their own well-preserved bodies, leaving an indelible mark on the world which we continue to celebrate through symbolic tattoo designs.